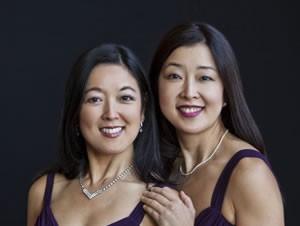 Japanese born pianists, Yuki and Tomoko Mack, have dazzled audiences on three continents.  After winning strong recognition as soloists, Yuki and Tomoko partnered to form the award-winning piano duo, ‘The Mack Sisters’.   From Bach to Piazzolla, their diverse repertoire includes a broad range of four-hands piano music and orchestral works.

Additionally, the Mack Sisters have been featured in the 'Gilmore International Keyboard Festival' in Michigan, the 'Symposium for Two-Pianos' in Florida, and the keyboard festival at the 'Quebec International Two-Piano Festival’.

Beyond the main-stage, they’ve performed live on the radio in Sweden, Italy, Poland and the United States. In Chicago, Yuki and Tomoko performed on multiple WFMT radio programs, such as the 'Dame Myra Hess Series' and 'Live From Studio One’.  They were also featured as guest artists on PBS in Michigan and Florida.

They’ve also recorded a highly acclaimed collection of four-hands piano music. Their collection of CDs include ‘Rhapsody’, ‘American Mosaic’, ‘Fantasy’, and ‘Danse Montage’ - all of which exhibit their unique sense of interpretation and flawless technique.

Motivated by music’s ability to empower the human spirit, they have developed Master Classes and Community Outreach Programs, all of which are very popular with students and audiences alike.

Currently, Yuki and Tomoko reside in Michigan where they’ve established themselves as highly sought after educators, performing artists, and adjudicators.  In 2017, they were both recognized as a ‘Top Piano Teacher’ by Steinway & Sons.