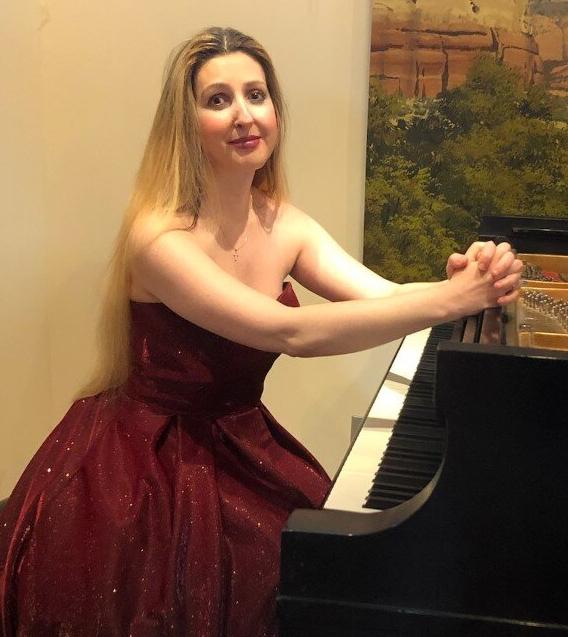 (For the best listening experience, please use your best speakers or headphones).

Maria Lida Karapanou is an internationally recognized concert pianist, musical educator and composer performing and recording both in the United States and her native Greece. Recent collaborations include the award-winning Royal Oak Symphony Orchestra under the baton of Grammy award-winning conductor John McLaughlin Williams and the Athens Phillarmonia with the venerable Greek conductor Byron Fidetzis.

Musically gifted since childhood, she decided to become a pianist at two years of age after hearing Arthur Rubinstein playing the Chopin F minor piano concerto on television. Her latent talent was soon recognized by the renowned pedagogue/composer Vaggelis Kyritsis, and she was given a special exemption to enter the Athens Conservatory at just five years of age. There she flourished under the mentorship of such well-established educators as the composer/teacher Babis Kanas. Not surprisingly, she consistently received the highest marks and ultimately won the Conservatory's First Prize (by unanimous decision) in the year 2000, graduating with a degree in piano performance.

After graduation, she won first prize at the Gina Bachauer Foundation competition and a competitive scholarship from the royal college of music which provided her with the funds to study abroad at the Royal College of Music in the United Kingdom under the great Yonty Solomon. She received her postgraduate diploma in performance in 2001. Subsequently, she went on to win the first prize in the Greek state scholarship competition, allowing her to study at the Royal Conservatory of Scotland, where she received a Master’s in Performance in 2003.

She has performed internationally on the piano and harpsichord in solo recitals as well as in collaboration with singers, chamber orchestras, choirs, and other soloists, including the award-winning violinist John McLaughlin Williams. Although she has a tremendous range and is devoted to honoring her Hellenic roots through her masterful interpretations of the Greek composers, her greatest passion has always been Chopin.

Her recent release Chopin’s works by Maria Lida Karapanou on the Subways Music label was highly critically acclaimed. The respected music critic, Thanos Matzanas, describes her treatment as having greater understanding of the spirit of Chopin than that of most of the acclaimed soloists performing today. He went on to note that she revealed the emotional world of Chopin in a way which honored his genius as a composer as well as her greatness as a performer.

Ms. Karapanou currently resides in Michigan and is active in performing, teaching, and recording both in the United States (at the Brookwood studios) and in Europe (most recently with the Athens Phillarmonia).